This post is a reflection and information sharing on the interconnections between the practice of mental health therapy and counselling, and the 8-limbed practice of modern yoga. This article is for people interested in Self-development and personal/collective evolution. Therapists and clients, and the general public, may find this an enriching read. Yoga teachers and practitioners may find it supportive of contextualizing and affirming modern western practices. The hope is that at bare minimum, the article is an opening which inspires further study and a broadening of perspective. If it offers the reader a sense of affirmation that one is on their true path, it has surpassed this aim. It is by no means exhaustive of the rich literature available on yoga and its traditional roots.

Most folks hear "yoga", and it conjures up an instant idea or image of what "it" is - a physical form of exercise that generally involves stretching and movement, maybe even relaxing and calming. In the west, this is not at all an uncommon ethos. Social media may indeed contribute to the "image" of yoga. But yoga has been around for thousands of years, and what is missed in the contemporary materialized versions of yoga is certainly where its most potent and transformative teachings reside.

One perspective among several is that the ancient sage Patanjali was said to be the codifier of yoga - that is, he took what was an oral tradition and had it written in language so it could be translated and transmitted to other humans for the benefit of those interested or called. In the Yoga Sutras, Patanjali outlined the 8-limbed practice of yoga: Yama, Niyama, Asana, Pranayama, Prathyahara, Dharana, Dhyana, Samadhi. Asana reflects the above noted physical postures of yoga. Yama and Niyamma are closely related, with the 5 Yamas reflecting teachings/observances on how to live well with others, namely, the practices of non-harming, truthfulness, non-stealing, abstinence or containment of one's energy, and non-hoarding or non-grasping (Ahimsa, Satya, Asteya, Brahmacharya, & Aparigraha). The Niyamas offer pointers on how to cultivate a healthy relationship with oneself, namely, the practices of cleanliness of body-mind, contentment, discipline/practice or "heat", self-inquiry/self-study, and surrender to source/origin/awareness (Saucha, Santosha, Tapas, Svadhyaya, & Ishvarapranidhana). How to live well with others and ourselves…this sounds much like what humans reflect on in counselling and therapy settings does it not? It is noteworthy to point out that yoga here begins with this foundation, even before the physical asana is performed.

Non-harming is woven into the fabric of the fiduciary relationship between client and therapist. It is instilled in the code of ethics for counsellors, therapists and caring professionals alike. Truthfulness is foundational for therapeutic relationships based on trust. We can see non-stealing of others energy and conserving one's own energy as the practice of healthy boundaries in relationships; self-care, respecting each other's time, not exploiting clients or friends, etc. Observing one's attachments to people and things in a mindful way can be supportive of deep insight.

We can see how self-inquiry, the willingness to look at what motivates and repels one, patterns and habits of behaviour, and where one is putting their energy, is a key element in folks seeking counselling. We see "surrender to a higher power" in supportive groups such as Alcoholics Anonymous, and we see most existential, person-centered and somatic therapists practicing the phenomenological attitude of surrendering to what is being shown, what appears for our clients and ourselves in the therapeutic hour. This can be recognized in the being-there, or there-being, of Heidegger's Dasein (Längle, 2019) - whether a being-the-space-of openness and curiosity for a client or invoking a turn of attention to one's own pure awareness as it arises in this moment. This presencing is Ishvarapranidhana.

We can see getting exercise of some kind, making healthier food choices, and tending to our cognitive dissonance and thought traps as caring for the health and purification of our body-mind (Saucha). Something like Narrative Therapy, Dialectical Behaviour Therapy, Inquiry Based Stress Reduction, or Cognitive Behaviour Therapy (might be one way of looking at this area of life (Josefowitz, & Myran, 2017). Trying to be content while throwing yourself into the alchemical fire of therapy or a committed life practice (such as yoga, meditation, Qi Gong, Tai Chi, gym workouts, marathon running, learning a new skill, etc.) is Santosha. This image of fire conjures a burning off of physical-mental-emotional-spiritual impurities, the heat of intentional focus, the fire created by the friction of discipline, challenge and prospect of change, which is Tapas. In Jungian terms we can see this as "incubation", the process of individuation and transformation from undifferentiated confusion into the clear light of understanding and self-transcendence. What is being transcended is an embodied identity attached to figured, habitual ways of interpreting and approaching one's world that are no longer appropriate for one’s current life situation and relations (Russon, 2003). Any therapeutic venture worth its salt is aimed at this project of self-transcendence, just like any teacher of yoga worth their salt is mindful of the rich complexities (and responsibilities) that rest in the privilege of transmitting the teachings of yoga.

Pranayama is the regulation of one's breathing - polyvagal theory has much to say about this and the relevance it has in therapeutic settings (Porges, 2022). Prathyahara, Dharana, and Dhyana are withdrawal of the senses and turning inward, focussed one-pointed concentration, and immersed meditative absorption, respectively. Therapists, like yoga/meditation instructors, are often space holders for supporting this kind of development for clients, either implicitly or explicitly in the offering of mindfulness skills training.

Samadhi has been defined by Patanjali as integration - integration of egoic consciousness with pure awareness (Ishvara) – a uniting and seeing through of the veil of separation created by the view of a divisive state of interpretive consciousness (Hartranft, 2003). Dovetailing this idea, in his book, Mind: A Journey to the Heart of Being Human (2017), founder of Interpersonal Neurobiology Dr. Dan Siegel draws out "9 domains of Integration". They are a helpful outline of 9 key-domains of human experience, which are: Consciousness, State, Memory, Narrative, Temporal/Existential, Vertical, Bilateral, Interpersonal, and Identity integration. Siegel defines integration as “the differentiation and linkage of separate parts”, while disintegration can be experienced as either or both chaos and rigidity “on the banks of the river of integration” (Siegel, 2017). This idea fits well with the notion of yoga as a whole and Samadhi particularly. We can see this same idea expressed in Internal Family Systems which seeks integration of disintegrated, mislabelled or disowned parts of a person’s psyche (Schwartz, 2021). The integration of consciousness, fostering wholeness and self-transcending acceptance of being human – this is what is sought out and offered in yoga and therapy.

These ideas and concepts all seem basic and ordinary enough, probably things we've all heard. Yet it’s clear that these are not easy teachings/practices to fully embody. The yoga and therapy settings are fertile grounds for examining ourselves, our identity claims and conclusions, and our habits of self-other reflection which can lead us in maladaptive ways of living in its many dimensions – thinking, speaking, behaving, interpreting and so forth. By making explicit such implicit identity conclusions, the opportunity reveals itself as one in and through which a person can authentically “own up to one’s life” (Russon, 2003). In this way, authentic living is not a given or guarantee, but actually takes effort – trying new behaviours, learning new habits (of understanding) and the willingness to look inwards and at times surrender to who and what one is becoming. The wisdom of insecurity experienced as one observes old loyalties is a marker of the transformational process.

Counselling and yoga can support the growing capacities of thinking about one’s thinking, the cultivation of discernment, self-understanding and the ability to regulate (integrate awareness of) one’s nervous system and emotions. When approached with (dare I say “loving”) awareness and intention, these practices nurture maturity and foster complexity in clients and practitioners. Taken together, these practices and teachings can offer profound holistic healing and understanding, supporting individuals to live well and authentic lives. The opportunity is far richer than the “image” of yoga presented at the outset.

Care for your project of Being and its many dimensions – that’s what it’s about. Yoga, counselling, therapy, auto-bibliotherapy (self-reading/learning), these are avenues for re-educating oneself: For individuating, for evolving, transforming, growing, learning, dying to the old, trusting sweet disciplines, and becoming the unknown potentials for articulated identity waiting to be actualized. Yoga, like the therapeutic project, as we have seen articulated in the Yamas and Niyammas and 8-limbs, is about connection, healing, wholeness, unity, bringing together understanding, inclusion, and right action – embodied enacting that is in alignment with the most important thing – you, your Being-Here, and your fundamental value with relationship to life. Discovering that is a gift and an open vista whom for many their humanity is waiting. 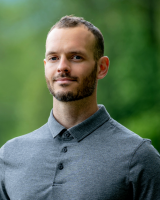